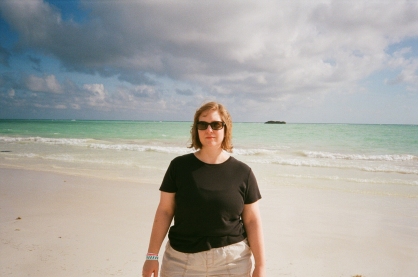 Today the topic is starting your weight loss journey. Three and a half years into my own journey, I still get asked by people who haven’t seen me in a while about what I’m doing to get in better shape. I happily explain, but honestly, I don’t know if they really do want to know. In less than a minute sometimes I see that glazed- over expression and I know exactly what they must be thinking. “I can’t do that.” Or, “I’m not going to do that.” Believe me when I say that what I’ve done is not radical or unrealistic or hard. But I did have to make the first steps to change. Obviously, at 5’ 2” and 192 pounds, I was doing something in my life that was not working for me and I needed to right it.

For me, it was as much if not more about getting healthy, and looking better was going to be a nice little bonus. My mother had just passed away from pancreatic cancer, and I was approaching my 40th birthday. Given the history of cancer and heart disease from my parents and grandparents, I decided that genetics were not in my favor. I had very little energy and my back hurt all the time. I knew that I needed to take control of the factors that I could control. But making the decision to do something, even if I didn’t know what, was step one. That was the hardest part, but once I decided that I was worth saving and my mind was set, I got going.

I’m still trying to get it right! I think when you start a weight loss journey you just want to start losing and see progress, and you’re so focused on reaching the goal that you don’t think about what comes after. Like that proverbial dog chasing the fire truck, what are you going to do when you catch it? Losing can be hard, but maintenance is a challenge. Helping anyone who really wants to know how I went about it and manage now is one of the reasons I started this blog. So if you want to know, you’re in the right place and I want to help.

Regardless of whether you’ve never had a weight issue in your life until now, or if this is the fifth time you’ve tried to take control of it, you start out the same way. You have to decide that today is day one and you’re not going to beat yourself up over past attempts. You are not doing yourself any favors when you listen to that little person in your head who tells you this is useless and that you’re going to fail again. I look at failure in this context this way: every failure you’ve had up to this point helped you learn what does and what does not work for you. Because of your failures you know what your roadblocks look like, so now you’re better prepared to either jump over them or find a path around.

I didn’t read that in a self-help book; I’ve lived it. I have lived it so many times that I know exactly what that little person in my head looks like. He’s a fat little version of Where’s Waldo, and he has a slice of pizza in one hand and a taco in the other. Don’t listen to that guy. Listen instead to a voice that says, “You can do this. You are worth the trouble. You deserve this.” Until next time, I wish you the best!